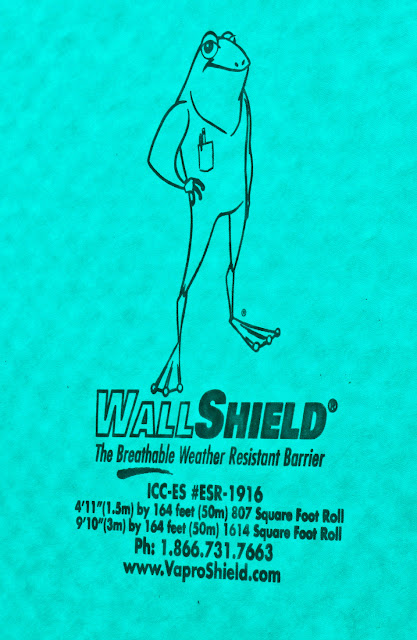 Here's a new addition to the neighborhood, the Remodel Frog. He grins back at me every morning through our kitchen window bay. This l'il character appears every three feet along the wall next door, making the view through all our northside windows bright and cheerful. I know the view of aqua-wrapped walls and orange trimmed window openings is temporary (and that's a good thing). Still, I will miss that army of cheerful frogs when they are covered by siding.

Frogs are an inside family joke, occasionally annoying but more typically funny. Green frogs with pink wings... I smile and shake my head at the thought. Nope, I won't go there. It would lose something in the explanation.

Back to the remodel: the house's exterior shell remains the same, though stripped of siding and some of it's stone. Check out the new clerestory window added to the roof. The east wall remains open to the lake, displaying open studs throughout the interior. 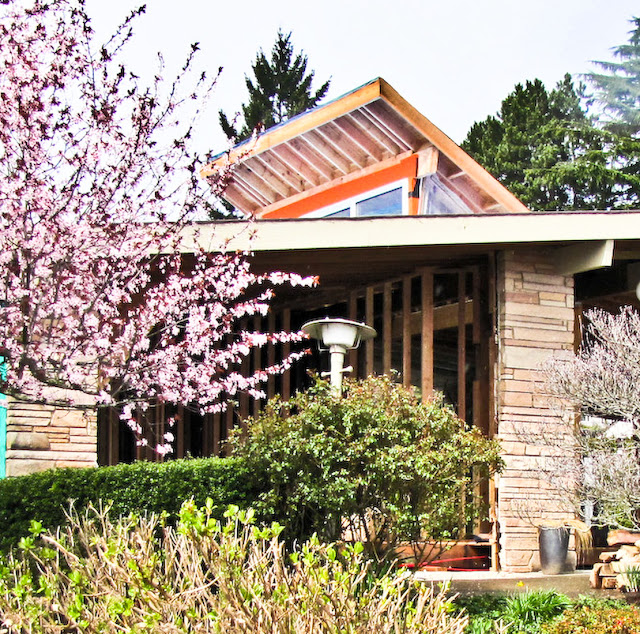 New swarms of subcontractors arrive each week, keeping the site active. Recently it has been roofers, plumbers and HVAC installers that joined the regular crew of carpenters. Big delivery trucks arrive and depart, worker's trucks fill up the street, and I can only imagine the choreography required to keep things progressing inside the house.

Construction is such fun to watch, even when it's next door.

Posted by SeattleDee at 1:54 PM No comments:

Labels: in the neighborhood

Spring made an official appearance yesterday, accompanied by sunshine and mild weather. My daffodils are in full-bloom, a few early tulips add their vibrant color to the yard, and the fruit trees are in full-flower. All of that adds sunshine to the soul and puts a smile on my face... even though it's tax season. Today Seattle wears a misty gray cloak and Mt. Rainier is hidden by rainclouds, a typically changeable weather pattern for March in Seattle, but the colors of Spring still decorate the landscape. 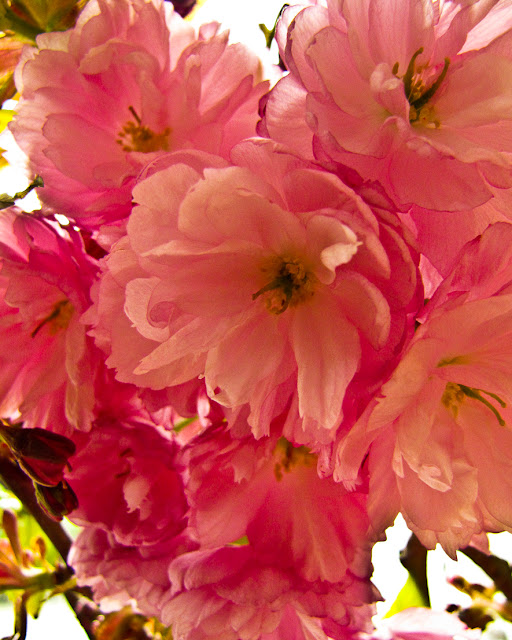 The sounds of Spring are another story. The tap-tap-tap of hammers and the buzz of an air compressor greet us at 8:00 a.m. five days a week. Yes, the remodel next door continues, filling our usually quiet neighborhood with construction activity... and trucks... and dumpsters... and a bright green port-a-potty. The crew is efficient, the jobsite is tidy, and it is interesting to watch the structure change.

Spring must have a sense of humor, though I'm not laughing. For several years now Spring has sent us visitors, unwelcome guests who attempt to move into the house via an exterior opening for the clothes dryer vent! The spring that closes the small flapper door must be a weak design, because the birds seem to have easy access every year.

Noisy bird chirps, very noisy and very nearby, are the first clue as the adults explore the opening. Next comes the scritching and scraping sounds of swallows hopping along the flexible six-inch diameter plastic tube. If ignored for just a day or two, the final clue would be strings and strands of grasses, nest-building supplies, hanging down the outside wall. You can laugh, but it's not funny to me. I have bad dreams imagining the swallows pecking through the plastic pipe and invading the house to nest in comfort somewhere inside. So I turn on the dryer and blast them out whenever I hear bird noises. Tiny bird brains must not remember that exciting event from year to year. I also pester the husband a lot until he drags out the big extension ladder and tacks an square of chicken wire over the dryer vent opening - unsightly but not as messy as a bird's nest would be.

Posted by SeattleDee at 10:27 AM No comments: