What is it about winter weather that turns the kitchen into a comfort food prep station? The snowy cold weather this week triggered non-stop simmering of soups, stews, chili and the like. Then the fragrance of homemade bread, and even (gasp!) a cake or two perfumed the air and prompted numerous taste tests.  Hmmm, good… still good… even better with drizzles of honey butter. While we enjoyed every bite, we don't need the extra pounds or padding that are part of the comfort food package. Perhaps we’ll just get fluffy, and sleek down again in early spring. It works for our local hummingbirds, just check out the difference shown below in the winter and spring photos! 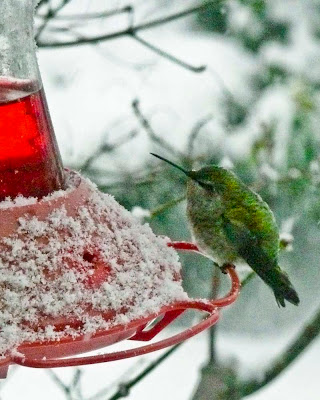 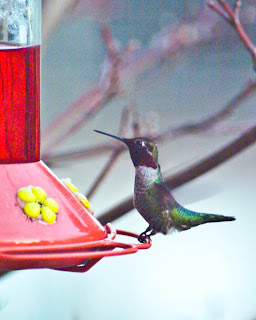 My primary outdoor exercise this week has been trudging across the snowy kitchen deck to refill the bird feeders. Hummer nectar freezes, so the feeder overnights inside in the kitchen. At 6:30 a.m. one hummingbird is usually perched on a branch waiting for his breakfast. If I don’t arrive until 7:00 a.m. the impatient bird lets me know I am late, buzzing my head and scolding with loud chitters. Let me sleep in and delay until 7:30 and the bird lands on the feeder base while I hang it up. I don’t understand birdspeak but I suspect it is a rude complaint.

Snow fell Tuesday from 4:00 a.m. until 10:00 p.m. (maybe later but I went to bed), with fat, heavy flakes dropping a curtain over the distant landscape and filling the air like the steam in a shower. Mercer Island and Renton disappeared from view. Even the bird feeders disappeared. After repeated trips to clear the nectar bottle holes I rigged a towel shelter that deflected much of the snowfall. The wind flapped the towel a bit, but the motion did not discourage the hummers for long. They buzzed it, hovered above and below it, and finally ignored it to land on the feeder and to loiter on tree branches under it's shelter.

Two Anna’s hummingbirds are regulars - yearlong residents in the neighborhood and winter diners at my feeder. The dominant bird vigorously drives off his companion so they rarely feed together but last night at dusk four hummingbirds fed at the same time. One tiny bird kept his long bill inserted into a feeder hole for over three minutes… I was sure he was frozen to the base. A second bird dipped his bill in and out, sharing the same opening, but bird number one never moved. Eventually they all zoomed off to wherever they spend the night.
Posted by SeattleDee at 3:12 PM No comments: